RSS Feed
← Shout out to the Volunteer Parent-Coaches!
Keeping the Game in Check →

Fives years ago I had the opportunity to be a fan at the best baseball game I’ve ever seen. I was living in San Jose and working as an instructional aid to a 3rd grade boy who had the diagnosis of  Spinal Muscular Atrophy. He played for the Challenger Baseball League which supported athletes who were differently abled. The experience of simply watching radiated happiness through my soul. Here is the article I wrote following the game:

Today I got the opportunity to watch the most enjoyable baseball game I’ve ever witnessed.The atmosphere was one that is unmatched by any other sporting event. Words can’t begin to do justice in capturing the charismatic energy felt in the park. It was an overwhelming encouraging happiness that festered throughout the crowd, into the dugout, and onto the field with the athletes. Just sitting in the stands made me bubble up with a tickling happiness that brimmed my eyes with joyful tears. It was the epitome of what youth sport should be all about.

The athletes were ecstatic at the chance to play baseball. Contagious smiles were permanently plastered across their faces. Cheers and squeals could be heard at every crack of the bat; kids laughed and some even bowed as they reached first base. Every single athlete put forth their very best effort in every situation; they remained undeterred with a cheerful disposition even when the outcomes were unsuccessful. These kids displayed immense amounts of teamwork; they lent a helping hand at every opportunity. They understood that it was imperative to work together in order to experience success. They cheered and supported every athlete, even those who were playing for the opposing team. The display of sportsmanship was impeccable. This was their game, and they knew it.

The fans were every bit as enthusiastic as the athletes were. Pom-poms and team apparel flooded the crowded stands. At times, some of the kids would come to the fence to greet their fans. They would remove their caps with a swing of their hand and simultaneously take a bow. The crowd erupted with cheers every time, going crazy over the chance to see a player within hands reach. A handful of kids were so passionate about the game that they would slide or dive into every base. Every time, without fail, the fans went wild, yelling, “He’s safe, he’s safe!” Every effort, whether the outcome was successful or not, was recognized and appreciated by the enthusiastic fans.

The coaches were encouraging at every turn. Their sole goal was to have each athlete experience success. With a little patience, and a lot of enthusiasm they ensured that each kid felt like an MVP.  The coaches empowered the athletes by urging them to use the tools they needed to succeed, whether it be a whiffle ball instead of a hardball or a ball set on a tee rather than pitched by a coach. Their focus wasn’t on the “right” way to do things; they emphasized individuality and creativity in the kid’s pursuit of success. 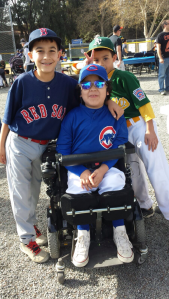 Alejandro and his buddies George and Diego

It was rewarding to the say the least. This was a Challenger league game. The little boy I work with, Alejandro, has Spinal Muscular Atrophy and this league caters to athletes who are differently abled. At every game his team is paired with a Cambrian Little League team and they work together to ensure that all kinds of kids get the chance to experience the magic of baseball. Every Challenger athlete has a partner from a Cambrian team who helps them execute any skills they may have difficulty with. The kids on both sides are learning so much more than the game of baseball; their involvement in these leagues is shaping their perspective on the world and those who inhabit it with them. They are learning skills and gaining knowledge that will drive them in successful directions throughout life. These kids are walking away with the essential life lessons that youth sport should instill in all of its participants. Well done San Jose, well done. (Original article: An Unforgettable Atmosphere)

I am so proud to say that my hometown of Petaluma finally has its very own Miracle League; a baseball league where differently abled athletes are embraced and celebrated. For the past two weekends I have found myself re-living that inexplicable happiness that I first felt in San Jose watching the Challenger League. My heart is beyond full that I have the opportunity to volunteer with such an incredible program right in my own backyard. I urge you to get involved so you can witness the magic for yourself. Thank you to all who have made the miracle league possible; it is the greatest reminder of what youth sport should be all about.

Check out all they have to offer! North Bay Miracle League

“Everyone deserves to experience joy and community through baseball.” – Miracle League Vision.

Posted in My Experiences, Uncategorized. Bookmark the permalink.

I am a special education teacher who also holds a MA in Sport Psychology.
View all posts by smarcia12 »
← Shout out to the Volunteer Parent-Coaches!
Keeping the Game in Check →