The statistics pertaining to youth sport participation are disheartening; 70% of children who are participating in youth sport will drop out by the age of 13.

My question is why didn’t I? Why did I play through college, coach through grad school, and am now pursuing a career that is centered in sport?

I specialized in one sport at a very young age; I played competitively almost from the get go, and even specialized in a single position by the time I was 17. I had all the warning signs of being an athlete who would burnout before reaching my full potential. So what kept me in the game?

I had a sport-life balance. Although I spent the majority of my time on the softball field, the people in my life helped to keep sports in perspective. Sports were a piece of my life, not my whole life. There were other more important things and values; my worth as a person didn’t solely reside on my performance as an athlete. 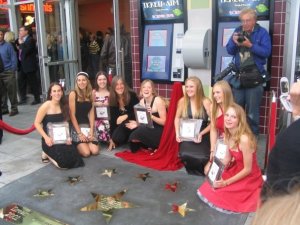 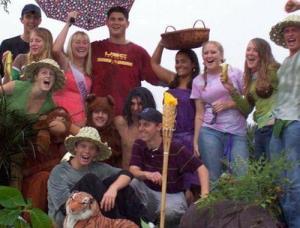 Working on the homecoming float my senior year of high school

The most obvious example of the sport-life balanced I achieved as a young athlete was in the diversity of my social circles, and the events that filled my monthly calendar. I grew up on a court where three other girls around my age lived. None of them were involved in sports like I was so our friendship was well rounded; we grew up running around our neighborhood experiencing and focusing on other things besides sport. I was also heavily involved in girl scouts, the six other girls in my troop made up some of my closest friends throughout high school. At the age of 15 we opened a theater in our hometown, an accomplishment that bolstered my confidence and added to my worth as a person off the softball field. (Read more about the teens who opened a theater in 2005 HERE.) The friends that I hung around with at school weren’t  involved in sports either, so again I had opportunities to develop other parts of myself; opportunities to be proud of things that had nothing to do with softball. I also had a long term boyfriend throughout high school that attended a school 20 minutes south of me, so I became very close to his friends and family which again added diversity to the people who were important to me. These people who made up my social life all valued me for more than my softball abilities. Some had never even seen me play, so my performance as an athlete was irrelevant to our friendship. It caused me to grow up in an atmosphere that catered to all of me, and helped to give myself worth in all areas of my personality, not just the piece of me that excelled on the playing field.

White water rafting with the team in Park City, Utah

I was also privileged enough to grow up in a family that was able to take vacations outside of softball tournaments. As I got older my softball team flew all over the U.S. to compete at the highest level. However, my family was fortunate enough to be able to take an additional family vacation each summer. It kept it in perspective that sports were important, but family time was highly valued as well. Not only did I get to experience genuine family vacations, but I had a coaches who understood that for some families, our tournaments were their family vacations. As a team we made every out of state trip a fun family experience as well as a serious competitive outing. Our coach allowed the team moms to plan water rafting trips, team dinners, horseback riding excursions, and once in Park City, Utah we even went on a team hot air balloon ride! My coaches knew the value of having a sport life balance and let us genuinely enjoy our tournament trips. Some of my most favorite memories are from these tournaments and everything we did made me fall even more in love with the sport. Doing other activities while traveling also allowed my teammates to get to know me as a person, not just an athlete. You learn to appreciate your teammates for more than just their athletic performance; you also learn to value the other pieces of yourself. 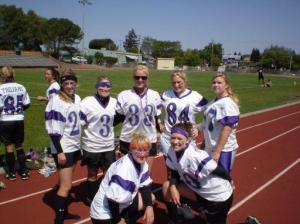 My parents were the most prominent influence of keeping my life balanced between sport and other experiences. The house I grew up in bordered a regional park. On my court lived three other girls that were around my age. Also on the court were kids who were a few years older, and others who were a few years younger. At any given time there were anywhere from 1-13 kids to play with, and a plethora of open space to do so in. My home life away from the softball field consisted mostly of free play with my neighboring peers. Some of which my parents probably weren’t too thrilled about; like tying a rope to a bike seat and holding on for dear life while being pulled on rollerblades. I was lucky enough to have parents who let me be involved in “risky” activities (like the one mentioned above) without reprimanding me to stay un-injured so I could compete. This example may seem subtle, but little things like this that were noticeable on a day-to-day basis were the most influential in keeping sports in perspective. It was a constant reminder that there was more to life, and myself, than sport. 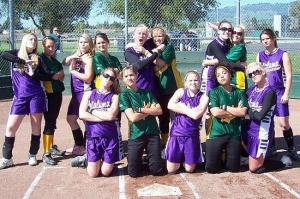 Athletes who have a diversity of experiences and people in their lives learn to value all dimensions of their personality and abilities. This quality helps athletes who encounter chronic slumps, difficult teammates, and unfavorable coaching stay in the game. They can stick with the sport they love through the pitfalls and hardships because they have developed as a whole person and see the value in other experiences; Keep kids in sport by fostering their development as a whole child, not just an athlete!

Imagine there is a bank account that credits your account each morning with $86,400. It carries over no balance from day to day. Every evening the bank deletes whatever part of the balance you failed to use during the day. What would you do? Draw out every cent, of course? Each of us has such a bank. Its name is “time”.

Every morning, it credits you with 86,400 seconds. Every night it writes off as lost, whatever of this you have failed to invest to a good purpose. It carries over no balance. It allows no over draft. Each day it opens a new account for you. Each night it burns the remains of the day. If you fail to use the day’s deposits, the loss is yours. There is no drawing against “tomorrow”. You must live in the present on today’s deposits. Invest it so as to get from it the utmost in health, happiness, and success. The clock is running. Make the most of today. This is your moment.

Should I Thank Dr Seuss?

As a 24 year old graduate student hoping to attain her doctorate in the future, I would label myself as a pretty driven person. Throughout life’s dips and spills I’m one to keep my head up and continue to look to the future. I’m aware of this quality that I posses, but lately I’ve been curious as to where I acquired it from. Naturally, I give the credit to my parents first, and then I assume organized sport played a role due to my extensive history. However, a gift I was given on my 21st birthday makes me consider another contributor. On my 21st birthday my parents gave me the children’s book, “Oh The Places You’ll Go” by Dr Seuss.

Have you read this inspiring story lately? It’s incredible.

It’s a book of rhymes which instills a message that is valuable at all ages. You are in charge of your life and the direction you choose. You’ll have tough times, and things wont always go your way, but you will eventually succeed. You’ll keep pushing forward and “KID, YOU’LL MOVE MOUNTAINS”.

What a powerful message! It’s a vital belief when conquering the ebbs and flows of life. How lucky I am to have learned it during the years I was shaping my perspective on life. Children’s books are of the upmost importance when teaching kids life skills; a fact I wasn’t aware of until a life-long friend told me this:

“Picture books are the most important books anyone ever reads–or doesn’t read: Interaction with books at the beginning of life has SUCH an impact, and it’s absurd the tiny degree to which that responsibility is taken seriously. It’s a huge responsibility! The author and illustrator become the kid’s conduit to a new way of seeing the world for five minutes, and if they’re not careful, this can have a huge (and potentially negative) impact. I think people see the tiny page count and the dearth of words and think “easy!” But it’s not, and it shouldn’t be. Picture books need to be given the weight and consideration of the true art form that they are.”

I never considered that a children’s book would resonate with me so deeply at the age of 24. It’s amazing how relevant the message is to my life now, even though it was written for a child. With quite a few books under my belt, “Oh the Places You’ll Go” is still one of the best books I’ve ever read. So thanks Dr Seuss, and of course mom and dad, for the courage, drive, and perseverance to chase my passions.

Quote of the day:
“You have brains in your head.
You have feet in your shoes
You can steer yourself
any direction you choose.
You’re on your own. And you know what you know.
And YOU are the guy who’ll decide where to go.”- Dr Seuss