RSS Feed
← About
Shake it off and Stay Positive → 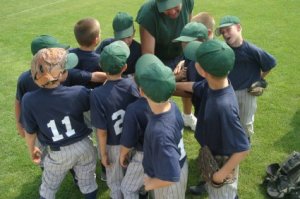 Do Sports Build Character? According to a Research Digest article entitled, “Sports and Character Development”, simply put, no. However, CAN sports build character? Yes. And I completely agree. In the article they identified three prominent aspects of character as; Perspective-taking and empathy, moral reasoning, and motivational orientation. So, someone with good character knows how to see the world through anothers’ eyes, and can empathize with their situation. They know right from wrong, and act accordingly. Lastly, they are motivated intrinsically; they strive to truly master a skill, rather than just to simply beat an opponent.

We can’t just throw youth into sports programs and expect them to emerge with a good stable character that will enable them to “live in fidelity with their moral values”.  To me, this point is obvious. For instance, look at our professional athletes, how many times have we seen our sports idols

caught up in a steroid scandal? If their history with sports had created a sound character for them, they would believe cheating was wrong, and wouldn’t be tempted to win by an unfair advantage. On the contrary, sports seem to be a big contributor to the good character displayed by players like Buster Posey and Greg Maddox. So what’s the secret?

According to the article, coaches of sports programs have to consciously implement character building into their coaching philosophies and styles. They have to talk about, and discuss, the aspects of good character and how it relates to sports with their players. My favorite example of this strategy demonstrated how to bring awareness to the character trait of empathy.

It’s so common in sports to hear a coach say, “keep your head in the game” when an opponent gets injured. Empathy is almost shunned in the moment. But, after the game, coaches can ask their players to put themselves in the injured players shoes. Asking them, “How do you think suzy felt when she hurt her ankle sliding into home plate?”.  Coaches can open up the conversation, allowing them to realize that getting injured or losing, isn’t the easiest situation to be in.

As a coach, you have a huge impact over the “motivational climate” of your program. In the Sports Psychology world, it is common

knowledge that intrinsic motivation is more beneficial than extrinsic motivation in the long run. You want your players to strive to be the best they can be, not just better than their opponent. You want them to play the sport because it feels good on the inside, gives them a sense of compentency (internal rewards), not because they get to show off, or be considered a winner  (external rewards). Coaches can alter the “motivational climate” to breed intrinsic motivation. Make practices focus on giving your best effort, being better than you were the day before, and highlight the positive things.

Being a coach gives us such a unique avenue into shaping someones life, personality, and experiences. In learning and implementing strategies, like these named above, only increases my confidence of becoming the inspirational coach I want to be someday. One of the reasons I love Sports Psychology so much is that it seamlessly applies to my everyday life. I get to use these tools in my day to day life, nobody’s perfect, and I certainly am not. These are things I can talk about with my friends, or acquaintances, or even my kids one day. You don’t have to be a coach, or be in the sports atmosphere to apply these strategies. These are strategies I can use with my kids in the car some day. Just facilitate a conversation about one of their friends that got hurt, BAM, character building lesson right there in the car.

Just another tool to throw into my coaching, and everyday life, tool kit. Thanks for reading. 🙂

Read the full article, “Sports and Character Development” at

I am a special education teacher who also holds a MA in Sport Psychology.
View all posts by smarcia12 »
← About
Shake it off and Stay Positive →